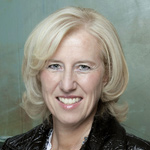 I have been following the work of Josef Florian Krichbaum with great pleasure for many years. He is one of the few artists of our time to use the technique of the old masters and invent poetic visual narratives. While initially creating mostly small-format pictures, the artist now also tackles large formats with an equal measure of quality and narrative density, reminiscent of Franz Sedlacek and the Magic Realism of the New Objectivity.

The meticulous care he dedicates to even the preparation of support bases, is unusual in this day and age. With the same meticulousness and a special eye for details, marvellous pictures are created, magically attracting the observer, even drawing the viewer into them. The paintings are strangely peculiar, moving in a type of parallel world. These pictures cannot be absorbed fleetingly, in passing; on the contrary, one must look closely indeed to tap the fantastic world: in it, the most multifarious characters cavort, both human and superhuman in nature, mostly in groups, in fantastic landscapes. Guardians, meant to watch over nature and the people, stagger – only too human – drunk out of a city gate. Without further ado, the Raft of the Medusa by Théodore Géricault is turned into a sleigh ride in the snow. But where is the ride going? It is not only a pleasure ride, for after all, the sleigh carries packed carpets, clothes, books, and food. And who would ever fly flags on a sled?
The artist’s joy in depicting absurd situations, exaggerated postures and unusual perspectives makes itself felt. But behind the amusement the pictures so fundamentally emanate, lies the artist’s critical view of nature, society and the manner in which we interact with each other. This is what he desires to show us, by means of a fine brush and quiet tones. Let’s look with him! 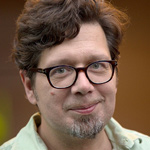 especially since it must be read as an imperative (kriech = creep, Baum = tree) if it is not to be oxymoronic. Trees are rooted in the earth, so they can hardly go creeping off somewhere, can they? Or do you think they might creep about secretly at night like wooden Peripatetics and swap places? Perhaps it isn’t only sand dunes that are mobile, perhaps trees move around as well. Creep-trees? Might it be that trees stand still only when you’re looking at them but spend the rest of the time in motion?
All the Krichbaums of my acquaintance are gnarly, burly individuals. I don’t know Josef Krichbaum personally, but I know his pictures, and I am convinced that a person’s name says a lot about him, like a skin one spends a lifetime growing into. Josef Krichbaum spells his name without an e, it must have slipped out the door and run away, leaving behind a name that sounds rather like a transcription of the Northern German “Krieg-Baum” (war tree), which suggests something martial, though it might also inspire hopeful thoughts of tree planting ceremonies. But perhaps it was just that the pen of some scribe in the age of Franz Joseph slipped while recording the more charming name Kirchbaum (cherry tree)? Krichbaum is a name that strikes me as appropriate precisely because it is so disorienting, it forces you to take a second look to confirm the missing e, eliminating all thoughts of creeping things, while at the same time leaving us to enjoy the fruits of the vowel shift.
Josef Krichbaum’s pictures, then, are pictures that could have been painted only by a Krichbaum. They are firmly rooted in solid painterly technique that reminds me of the realist painters of Eastern European countries. They show us rural themes, motifs from bygone days, from some other century, little scenes that at first might make an enchanting impression, ostensibly telling tales set in some remote village. But when you keep looking, the idyll suddenly creeps out of sight. The doughnut eaters, for example, have something aggressive, even violent about them; the two “proper persons” seem to radiate a certain ominousness difficult to pin down; and the couple in the vista—I can’t tell if they’re seated on a rooftop or just a road somewhere—suggest an equal measure of enjoyment and discord.
Art, as I prefer to define it for myself, can be seen as a work when it can be profitably encountered again and again (whether aesthetically or cognitively), in other words when its meaning is not fully revealed on first viewing. In this sense, Josef Krichbaum’s pictures are art, at least most of them. I don’t yet understand them. They’re well-painted but strange, says my nine-year-old son, and I think he’s right. These pictures are humorous, but they aren’t caricatures, there is something perfect and classical about them, yet they are also rough, open, almost dilettantish. There’s an atmosphere I can somehow associate with them but can’t put my finger on. Their use of symbolism, it seems to me, is just a pretense, a façade that lets them underhandedly sneak up on the viewer from behind.
And even though their style suggests naïveté, these pictures are anything but naïve. They uncover the caves and ravines of the soul, states of being. These pictures remind me of South American painters and a much earthier and more honest sort of fantastic realism than the version marketed to death by the Vienna School. In Josef Krichbaum’s pictures I can see the uptightness and inhibition of Austria’s rural population, and although there is no blood spilled in these pictures and no one is being worked over with instruments of torture, you can sense the internal damage of the people portrayed here, the enormity of the slights and acts of spitefulness they have suffered, the entire palette from the grumblings of the reclusive troll to the joys of digging around in one’s nose with pudgy, glistening fingers until the jam squirts out. In this respect, Krichbaum seems to me the contemporary Austrian form of the revered Frida Kahlo, who, by the way, doesn’t have an e in her name either.”
(translated by Susan Bernofsky) 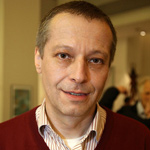 “People play a role, probably the most important role, in our lives. They enter the stage and the  performance begins. Just like in theatre. The roles are varied. They often change within instants. Everyone plays several roles. Theatre or everyday life? The most incredible scenes of the human species’ drama often occur in everyday life. As if they were managed by an invisible director.

Painter Josef Krichbaum captures characteristic moments. He offers us insights into the human soul. Highly perceptive, the artist conveys feelings and sentiments in a variety of hues. Krichbaum lets (?)us look behind the masks of his actors. Their disguises are at the same time utterly revealing.
Krichbaum observes society. It both fascinates and moves him. In his picture world, the artist reflects upon society – observed and experienced through his own world. In a profound, time-critical, sometimes stubborn, and mostly also playful manner. Through parables of society he presents things noted and noteworthy – just like on stage. He reveales role behaviors and rituals. The relationship between man and woman seemes both inexhaustible and unfathomable. A timeless topic depicted in timelessly thought-provoking pictures.
The beholder is confronted with stories. Highly detailed and imaginative – just like the style of the pictures. With fine craftsmanship, the artist leads us into his picture world of narrative realism. His paintings are not merely intended to generate a sensuos experience of colours. They also animate the observer to think about the illustrious society in our everyday life. Everyday life or theatre? The boundaries are blurred. Just like in real life.” 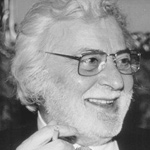 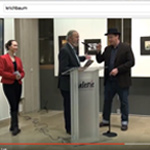